AUSTRALIA:  For the past day, people around the world at least the ones who can get past a certain spider video without screaming “kill it with fire!” have been engaged in a rigorous debate about whether Andrea Gofton is one of the most compassionate Australians on her continent, or simply insane.

This month, her community has endured its worst flooding in almost a decade nearly 20 inches since March 1 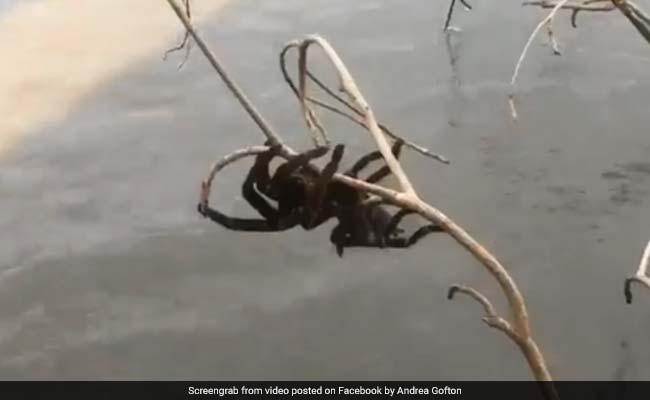 Homes and roads are flooded; students on a field trip to Echo Creek Adventure Park got more creek and more adventure than they were expecting; and towns have been declared a “disaster area.” Still, all things considered, the waterlogged population has escaped mostly unscathed.

At least the humans. It is a tough time to be an air-breathing animal in northeast Australia. Dens and burrows are flooded. Food sources are underwater and water-adept predators, particularly crocodiles, sharks and snakes, are riding newly-created waterways in search of unsuspecting prey.

But Gofton’s ethical dilemma came in the form of a not-so-tiny spider found clinging precariously to a tree branch: A giant Australian tarantula called the bird-eating spider.

It is, of course, almost instinctual for humans to want to save animals, even when they don’t do a particularly good job of it.

But there are some things about the spider that Gofton encountered that people need to know before deciding to reject the offer from #TeamKillItWithFire.

It is huge: The spider can grow to be the size of a man’s hand, a two-inch body with six-inch legs. That is bigger than some chihuahuas.

It has giant, venomous fangs. The tarantula’s fangs are nearly half an inch long, about a sixth the size of its body. The Queensland Museum says the tarantulas “can be quite aggressive if mishandled” and that the bite is “quickly fatal to dogs and cats,” but rarely causes serious illness in humans.

It has a deadly, if inaccurate nickname.Scientists have pointed out that the name “bird-eating” spider is, technically, a misnomer. The giant Australian tarantula only occasionally eats birds. Instead, it feasts on lizards, frogs and other spiders, a correction that is not at all reassuring.

It is standing right behind you. Okay. That one is technically a lie, but not as much as you think.

It hisses. Although some have said it’s more of a bark. Either way, the sound is nature’s way of saying “Don’t save me from this raging river, Andrea.”

But some people don’t listen.

Gofton and her friend Andrew Giliberto encountered the arachnid outside a SPAR Supermarket in the town of Halifax. The creature’s legs were intertwined over a flimsy branch, which was the only thing stopping it from being swept away by the water below, according to 9News Australia.

One of the Aussies filmed, while another put a hand close to the spider, apparently to see if it would latch on. It didn’t. So they snapped the branch that it was on and carried it to a nearby avocado tree, where they set it free.

They’ve spent the subsequent 24 hours going back and forth with ardent supporters of spider-cide, arguing that their actions were heartwarming, not horrendous.

Clearly, critics argued, Gofton had not gotten the message that giant spiders are notour friends.

“Nope nope, just nope,” one woman wrote on a post about the spider-save on a community Facebook group about the floods. “The tree has gotta be burnt, with a flame thrower.”

A short time later, Gofton replied: “I’m glad there are decent people out there, the negativity about an animal is beyond ridiculous.”

Of course the spider is the one who’s having the last laugh (hiss? bark?). It’s now safely weathering out what remains of the storm in the avocado tree outside the neighborhood supermarket.

That means some unsuspecting shopper may be in for a surprise, especially if the rescued spider is female.

Another fun fact about the giant Australian tarantula: Females can lay 50 eggs at a time.