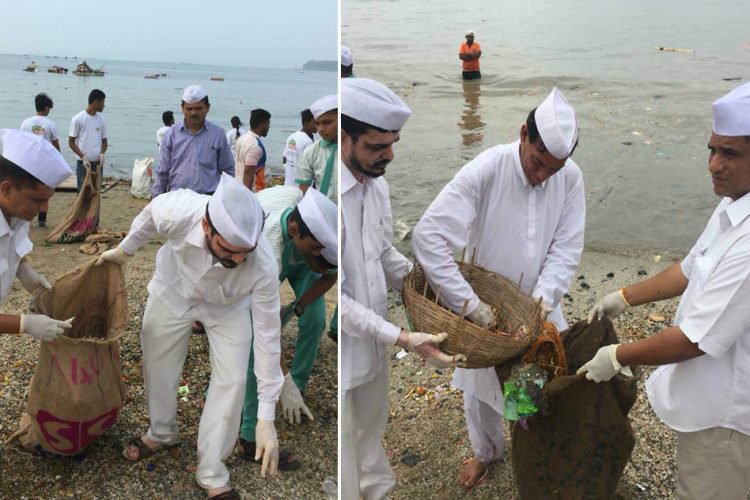 Every year, the ten-day Ganesh Utsav, which is celebrated with much excitement ends with the immersion of Lord Ganesh idol. The entire country celebrates the festival with music, dance and modak, but the Mumbai Ganesh Visarjan has its own charisma. This year more than 41,828 Ganesh idols were immersed in various beaches of the city. Sadly, the immersion ceremony also resulted in the accumulation of debris and clogging of beaches with paraphernalia related to the idols and the festival. That is when Mumbai’s iconic dabbawalas with their garbage bags and spades reached Girgaum Chowpatty to clean it.

Like every other year, the Brihanmumbai Municipal Corporation (BMC) had already taken up the task to clean the city. But this year the dabbawalas – who, incidentally, are one of the brand ambassadors for Swachh Bharat Mission (SBM), along with some students of Kamlabai Educational & Charitable Trust, decided to take the task on their shoulders.

Not tiffins but spades in dabbawalas’ hands

September 23 marked the Ganesh Visarjan, and from that morning to the next day morning, the idols kept coming to the beach for the immersion. On September 24, at around 9 AM, more than two dozens of people from the Mumbai Dabbawala Association, along with students started cleaning the beach.

The hands that usually carry tiffins were holding spades with equal enthusiasm. With passion and zeal, the volunteers started to clean the beach which was strewn with broken idols, garlands and food offerings. The cleaning drive went on for more than three hours.

The Logical Indian got in touch with the Mumbai Dabbawala Association spokesperson, Subhash Talekar, who also participated in the cleanliness drive. He said that even after the BMC has made so many artificial ponds to immerse idols and ‘Nirmalya Kalash’ to dispose of garlands and flowers, the Mumbaikars still leave it on the beach or in the water.

“This adds to a lot of pollution, land and water. Our drive this year was not just for cleaning but also to make the people aware of the Swachh Bharat Mission,” he added.

“These people do not love the country enough”

While talking about the responsibilities of a citizen, he said that when an Indian citizen visits other countries, they follow their rules. They make sure not to make a menace in that country. However, when it comes to clean our own country, they just don’t follow the rules. “These people do not love the country enough. If they did, they would not have littered things here and there, as they do not do it in their homes.”

The Mumbai Dabbawala Association also held a cleanness drive after the “Dahi Handi” celebration in the city. Talekar says that their cleanliness drive is not just restricted to festivals, they also go to schools and colleges to help them clean their area.

The Logical Indian appreciates the work done by Mumbai’s Dabbawalas and we hope more people realise the need for such initiatives.