You may or may not use Nirma’s detergent powder to wash your clothes today, but it is highly unlikely that you would be unfamiliar with this jingle, or the advertisement featuring a young girl in a spotless white frock, twirling around playfully.

The catchy jingle and the young girl were exactly what Karsanbhai Patel, the founder of the Nirma brand, used to capture India’s attention to and overtake the big names in the market in the early 1980s.

This is Patel’s story of how he took a new detergent brand from his backyard to every middle-class house in India.

The year was 1969, and a brand named ‘Surf’ by Hindustan Lever Ltd (now Hindustan Unilever) had complete monopoly over the detergent market in India.

Priced between Rs 10 and Rs 15, it removed the stains from your clothes without harming your hands and was better for your clothes than a regular bar of washing soap.

However, the price was a major pain point for middle-class households, who found it to be beyond their budget. So, they continued to use soap bars.

Karsanbhai Patel, a chemist at the Gujarat Government’s Department of Mining and Geology, wanted to enter this very market and provide middle-class families like his, some relief.

He decided to make a detergent from scratch in his backyard in Ahmedabad, Gujarat, keeping in mind that that the price of the product, as well as the production costs, needed to be low. 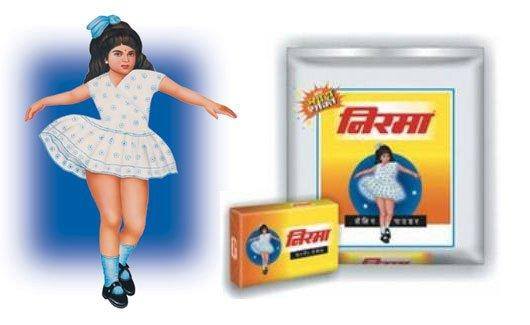 He developed the formula, manufactured a yellow-coloured detergent powder, and started selling it for Rs 3. The brand was named Nirma, after Nirupama, Patel’s daughter, who had passed away in an accident.

He would go from door to door in each neighbourhood and give a ‘money back’ guarantee with every packet he sold.

A quality product, Nirma was also the lowest-priced branded washing powder at the time and became a huge hit in Ahmedabad.

Soon, Patel quit his job and decided to pursue this venture full time and take on the big players in the market. In those days, credit terms were the norm for retailers to follow. If Patel followed those, he would have been left with a huge cash crunch. Something he could not risk.

So, he devised a brilliant plan. One that would make Nirma a household name across India.

The washing powder was doing fairly well in Ahmedabad so Patel invested a little money in a television advertisement.

The catchy jingle—which stated that Nirma was “sab ki pasand”(everyone’s choice)—and the girl in a frilly white dress, became an instant hit.

Customers flocked to local markets to buy the product. However, the cunning Patel had withdrawn 90% of the stock, to lather up the demand.

For about a month, customers kept watching the advertisement, but when they would head out to purchase the washing powder, they would return home empty-handed.

The retailers pleaded with Patel to resume the supply, and after a month, he obliged and flooded the markets with the product.

The demand was sky high—so much so, in fact, that Nirma overtook Surf’s purchases by a large margin and became the most sold detergent that year. In fact, it managed to keep up its production and sales for a decade after this brilliant move.

While the product was affected by the obvious ups and downs of the market, Patel was not too concerned because he had decided to beyond manufacturing just a detergent. Soon, he launched toilet soaps, beauty soaps, shampoos and toothpaste.

Some products were successful, some not so much. But the brand Nirma never lost its firm hold on the market. Today, it has a 20% market share in soap cakes and about 35% in detergents.

He maintains that the passion for keeping up the business and expanding its branches across markets is rooted in love for his late daughter.

Patel has been presented with several prestigious awards, including the Padma Shri in 2010 and was also featured in the Forbes list of India’s wealthiest (2009 and 2017).

Undeterred by the lack of a management degree, unafraid to go up against big names, and equipped only with a sharp business sense and a brilliant mind, Karsanbhai is a legend in the entrepreneurial fraternity, today.

He has proved that it is not just his brand, but his brilliance which is “sab ki pasand” in India.