Shocked at the news of the death of a pilot whale in Thailand due to consumption of plastic bags, Varun Saikia, a 12-year-old boy from Vadodara, wanted to design a machine which could help in cleaning polluted water bodies. Curious about the causes of plastic pollution prevalent in water bodies, he started researching more about the topic. Soon, he realised that it was a major global environmental problem and many countries have been grappling with the issue. 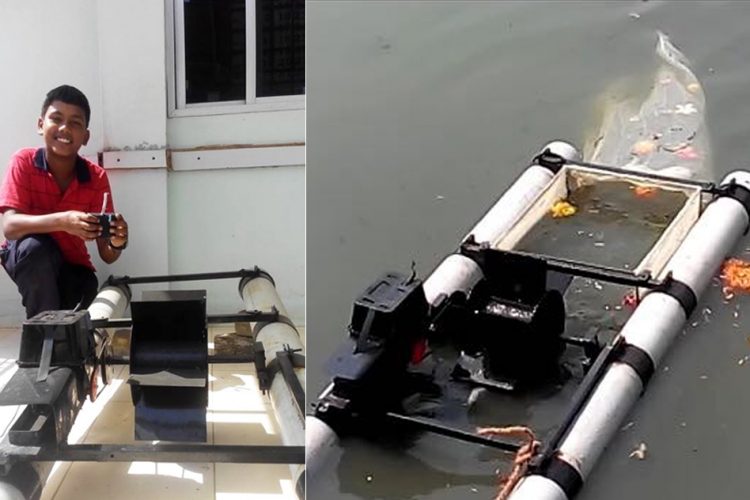 h “I thought of making a machine that would clean and collect all the floating plastic waste in rivers, ponds and lakes. Plastic floats on water bodies which makes it harder to scoop up and collect”, shares Varun Saikia, an eighth class student from Navrachana School, Vadodara. He came up with this idea in an attempt to combat the increasing pollution problems. His innovative device is named Makara which is designed to sweep the polluted ponds of our cities. What sets this device apart is that it is completely battery-operated which would reduce the manual work involved in cleaning.

Concerned about the increasing environmental pollution, he kept reading about adverse changes that have taken place all over the world as a result of pollution. He also came to know about the Great Pacific Garbage Patch and how it impacted ocean bodies on a major scale. He was distressed to learn about water pollution and he finally decided to come up with a solution which could be implemented in nearby localities and polluted water bodies.

Makara is a concept that uses the fluid mechanics of water to direct the plastic towards the receptacle without using any extra force other than the same mechanism which drives the machine forward. It is a simple machine yet sturdy in its structure. Propelled by a basic motor and remote, it can be customised to increase its capacity by using a heavy-duty motor and making adjustments to pulley.

Based on its current capacity, it can collect up to three kg of floating garbage in one go.  The machine is ideal for catching floating Styrofoam cups, plastic bottles and bags and dead floating insects. What makes it unique from other pond and ocean cleaning devices is its mobility in water bodies. Another added advantage of this machine is that unlike other models, it doesn’t need to be installed around the polluted water bodies. It could be effortlessly used to clean swimming pools as well.

He opines that using such simple models could extensively contribute in clearing garbage from polluted lakes and ponds. Apart from this, it would also be beneficial for the manual labourers working nearby dirty ponds or municipal workers cleaning these polluted water bodies as it is hazardous to their health and well-being. Scaled up, this model can work on larger bodies of water and even oceans. It could help to save our marine life and balance aquatic ecosystem largely. Talking of his future plans, he shares, “With heavy duty motor and bigger scale model, this vessel has the potential to clean up the coastal areas and it could be even workable on oceans. With proper funding, I wish to use this model to sweep oceans too. I even plan to make it energy efficient by generating hydroelectricity in future.”

He aims to develop this model so that he could view it working on a larger scale. What sparked his curiosity about increasing pollution has led him to design a model which would help to eliminate this problem. Such young ignited minds are taking the winds of change ahead.