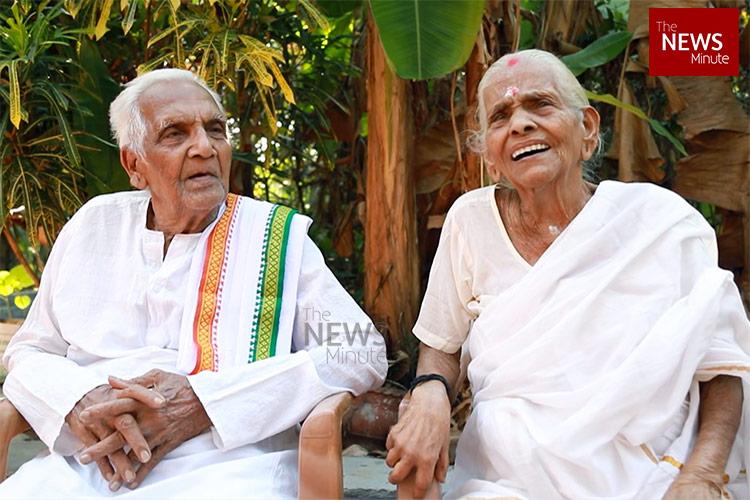 The Kottayam-based couple studied in the same school and later went on to marry.

Meenakshi Amma nods in agreement.  “See, he still remembers it so clearly!” she says, breaking into laughter.

The duo celebrated 82 years of their marriage in December 2017 and the milestone also coincided with Madhavan Nair’s 100th birthday.

In their house near Pallikkathode in Kerala’s Kottayam district, Madhavan Nair – who used to be an active member of the Congress party – and his wife Meenakshi Amma, continue to live their “happily ever after” to this day.

Together in youth and old age

Having known each other since a very young age, Madhavan Nair and Meenakshi Amma have retold their wedding story many a time to their children, explaining how theirs had been an arranged marriage and not a love marriage. The couple have five children together, all of whom stay in Kottayam.

“It is true that we knew each other from school. We had seen each other, but hadn’t spoken much. What do school kids have to talk to each other at that age? Years later, our families decided to get us married. So that’s how it happened,” Madhavan Nair says.

Asked about the wedding, Madhavan Nair’s recollection is matter-of-fact: “It was a simple ceremony, no pomp and show like today’s weddings. The wedding took place at her (Meenakshi Amma) house. I tied the thaali around her neck, gave her the pudava (saree) and there was a meal afterwards. That’s how simple the wedding was.”

After a moment’s pause, Madhavan Nair continues: “During our times, nobody got married in temples like now, and young people never eloped! The weddings used to happen at the brides’ house.”

When asked whether they feel the weight of 82 long years, the two of them smile. This writer was charmed to see Madhavan Nair’s toothless grin while Meenakshi Amma guffawed loudly, displaying her perfectly aligned teeth.

The years where Madhavan Nair was involved in party and social work had not been easy on his family, he admits. The odd working hours and the long absence from home did not exactly bode well for a harmonious family life. But Meenakshi Amma is in no mood to send her husband on a guilt trip.

“People would come to get him. He would go with them and share whatever knowledge he had. It never bothered me, since I knew he was going on work and not for anything else. He would return home after work for sure,” Meenakshi Amma says.

However, Madhavan Nair has for long withdrawn from his years of active social life, and now spends most of his time at home. While minor health issues do trouble Meenakshi Amma, Madhavan Nair likes to dismiss age-related woes.

Despite having to rely on a walking stick, the 100-year-old is young at heart.

“I walk around the house and the yard at times. With this walking stick, I can walk as far as I can. But I am not so young any more, I have no teeth left and I don’t think I look good with this toothless grin!” Madhavan Nair says.