It took years of planning and millions of Rupees to design one of India’s first planned cities, but Chandigarh’s biggest tourist attraction was not on the master plan of Swiss-French architect Le Corbusier. It was the product of creative imagination and fifty years of labor by a humble government official Nek Chand.

Nek Chand was a road inspector in the Engineering Department of Chandigarh Capital Project, in 1957, the year he started working on his secret sculptural project. Nek Chand would cycle to a gorge near Sukhna Lake, at the foothills of Shivalik hills, that was used as dumping ground for urban and industrial waste, and spend hours collecting discarded pieces of broken pottery, bottles, auto parts, plumbing materials, street lights, electrical fittings, broken sanitary ware and so on. He would carry the pieces to a nearby PWD (Public Works Department) warehouse and fashion them into artistic forms resembling humans and animals. 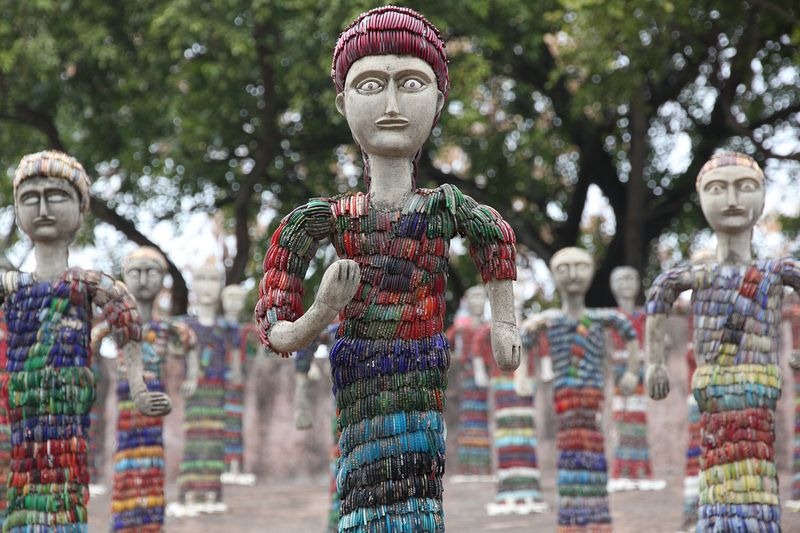 Nek Chand worked at night because he was afraid of being discovered. For eighteen years, he kept it this site a secret. By the time it was discovered, it had grown into a 12-acre complex of interlinked courtyards, each filled with hundreds of pottery-covered concrete sculptures of dancers, musicians, and animals. The Rock Garden, as it is called now, mesmerizes everyone who sees it. Today it is spread over an area of 40 acres, and is completely built out of trash.

At one point, soon after its discovery, the authorities wanted to demolish the park because Nek Chand didn’t have permission to build it, but the public intervened. In 1976 the park was officially inaugurated as a public space. Nek Chand was given a salary, a title (“Sub-Divisional Engineer, Rock Garden”), and 50 laborers so that he could concentrate full-time on his work.

In recognition of his work, Nek Chand was awarded the Padma Shri, the fourth highest civilian award in India. The Rock Garden also appeared on an Indian stamp in 1983.