As part of the custom, the idols along with temple elephants are taken to Shangumugam beach for the ritualistic bath.

For two days in a year, the Thiruvananthapuram International Airport halts its flight operations for five hours on the basis of a ‘Notice to Airmen’ (NOTAM).

Saturday is one of the two days in a year that sees members of the Travancore royal family, temple priests, police, and even elephants walk down the runway, as part of the temple procession. Hundreds of people also escorted the idols past the 3400-metre runway.

Flights have been halted between 4pm and 9pm at Thiruvananthapuram on Saturday.

The ‘Arat’ procession marks the conclusion of the Painkuni festival and the Alpassi festival. Painkuni and Alpassi are references to Tamil months. While Painkuni is in April, Alpassi is in October.

Arat is the ritualistic bath procession of temple idols at Sree Padmanabha Swami temple in Thiruvananthapuram. The procession, which began at 5pm, crossed the runway at 6.30 pm.

The procession returns to the temple on the same route, accompanied by people carrying traditional fire lamps.

They have to, however, ensure that they clear the runway by 8.45pm.

“The ritual was started centuries ago when the Travancore royal family ruled here. Even after the airport was established, the procession continued to pass through the runway. When the airport was established in 1932, it was under the Royal Flying Club. Since then, the runway was open for these processions. Even after it was converted into an international airport in 1991, the practice continued as the tradition is very important to this place,” an airport official told TNM.

Since the runway is part of traditional arat procession route, the Airport Authority of India issues passes to those who participate in it. Only those who have a pass can enter the route and cross the runway to head to the beach.

“There are strict restrictions inside the airport area. CISF officials guarding the area allow only people with passes. We issue the pass only to people in the list given by temple authorities,” he added.

NOTAM is issued a week before these two dates in the year, so that all the international flights can change their schedule. NOTAM is a notice issued to pilots or airline operators before flights, alerting them of the circumstances or changes in aeronautical facilities or about local procedures that affect safety. 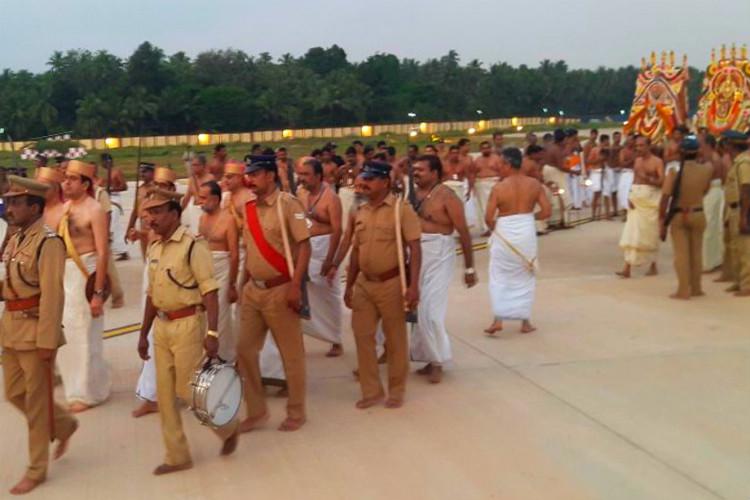